The Battle of Civil Rights: An Eastern Perspective

As students of the 21st century, it is easy to take the circumstances of daily living for granted (especially in the summer). Some sign up for classes and many may apply for financial aid to get through such classes. Then we zoom through a 6-8 week course and are ready to move on, easily forgetting the little effort that it took to achieve such tasks. But there are some students who we'll never forget in the fight of equality, especially those with such diligence as Andrew Miller, EKU's first African-American student. 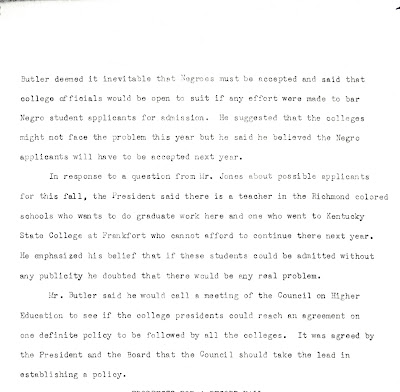 Andrew Miller, who had already attended the University of Cincinnati, had been teaching at Richmond High School prior to 1950 with the help of Eastern's President Dr. William Francis O'Donnell (president from 1941 to 1960). Thanks to the amendment of the Day Law(named after Carl Day of Breathitt County who was adamantly opposed to desegregation) in 1948, colleges no longer had to abide by segregation laws and could decide admittance for themselves. In March 1950, Miller appealed to President O'Donnell once again, but this time to take classes to further his education and obtain a master's degree. O'Donnell was reluctant and suggested the 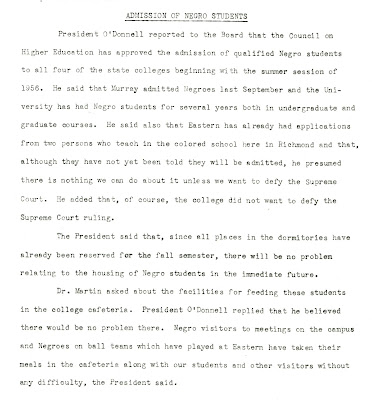 University of Kentucky (who had admitted their first black student the previous year). Miller attended UK until 1954, when financial burden and his mother's illness kept him in Richmond. In the meantime, Miller persistently contacted O'Donnell, explaining the situation and asking admittance, since most every other college had already actively desegregated. 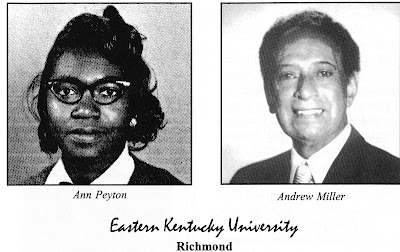 In the summer of 1956, O'Donnell allowed Miller to be admitted into the graduate school and he graduated with his master's degree in teaching in the 1958-1959 school year. In 1961, Anne Peyton Spann became the first black student to complete all four underclassmen years at Eastern and graduate. Despite this breakthrough, the students at Eastern still waived Confederate flags at occasional ball games due to other schools having many black athletes. 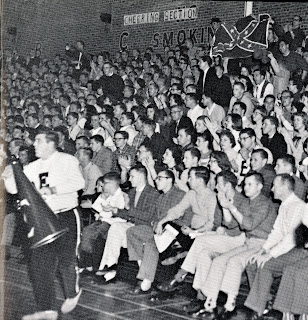 However, even as soon as 1958, some students were beginning to show a different stance on segregation and expressed their disdain for Eastern's actions and reluctance in the Progress. In 1959, the Progress quoted, "Our government does not ask too much of us to at least give this issue on integration a chance."

In the following years, Eastern grew in leaps and bounds, undergoing a complete 180 degree change of attitude. Not only did Eastern open its doors to black students, but in 1967, the university hired the first black professor, James Way. Way taught in the industrial technology department until 1983 and quoted to the Progress in a February 1989 issue, "As far as teaching was concerned, there were no social differences. As far as the department was concerned, I worked with fine people."
Posted by ashley.salyer at 11:29 AM