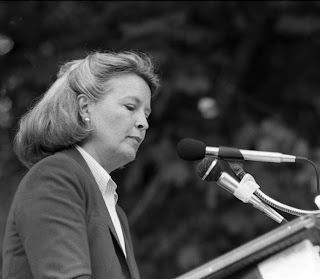 A few weeks ago, I received the opportunity to do a project on Martha Layne Collins who was the first female governor for the state of Kentucky. While working on this project, I had the responsibility of writing abstracts and creating keywords for a set of tapes that contained Libby Fraas's interviews with some of the people involved in the Collins's administration, which included Harrison Hickman, Joe Prather, Bob Stewart, Ted Sauer, Crit Luallen, Mary Helen Miller, and Duke Gordon. During these interviews, she questioned the individuals about how each of them became involved in politics, how Mrs. Collins ran her administration, how the governor was able to convince a Japanese company to move its Toyota plant to Kentucky, and how they were able to establish an education reform package for the state.
Although all of the topics listed above were interesting, I have to say that I found the story of Martha Layne Collins's emerging political career the most fascinating because she did not start out as a politician or a politician's wife. Instead of having a background in politics, she was just a hardworking home economics school teacher who sought to make a difference for the people of her beloved state through her teaching. It was just by chance that Mrs. Collins became a politician. According to the interviews done with the former governor, she just happened to stumble onto a career in politics when she began participating in local school and community organizations. Her involvement with various organizations fueled her interest in politics and made her want to learn more about the world of politics. In order to learn more about the field, she volunteered her services to local senatorial campaigns where she stuffed envelopes, answered phones, created fliers, etc. Eventually, her hard work in politics was noticed and she was talked into running for clerk of the Kentucky Court of Appeals in 1975, which she won. This victory set Martha Layne Collins on a long and successful political career that would last until 1987.
Posted by Heather at 1:29 PM