You Never Know What You'll Find in the Archives 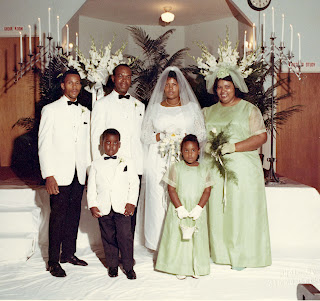 Hi, it’s Cherrelle Harris again. My latest project that I’ve been working on is organizing a collection of photos taken by a man named Jimmy Taylor. I scanned the images and entered them into the EKU Archives image database. The collection dates from 1940 to 1972. Jimmy was born August 6, 1913. According to Kentucky death records, Jimmy Taylor died at age 61 on April 9, 1975 in Madison County. According to the Lexington Herald, he was a professional photographer. He owned a restaurant called Jimmy’s Restaurant. Jimmy was survived by his wife Beulah Day Taylor. His funeral was at First United Methodist Church and he was buried in Richmond Cemetery. Jimmy’s photo collection was donated to our library archives by his wife, Beulah, in 1976. 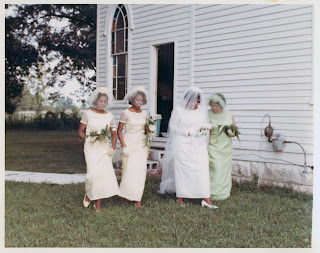 I found something very cool when organizing the Jimmy Taylor photo collection here in the archives. One day during my project I discovered that a few images were missing. The missing photos were of a wedding here in Madison county. When we found the hard copies I recognized the people in the photo. The first person I could identify was my dad’s brother, Paul Harris. In the photo he’s maybe 8 years-old. The next person I recognized was my Uncle Bobby. I was staring at the picture and was immediately shocked at what I found. A picture with some of my family members in it at my job was the last thing I expected to find. 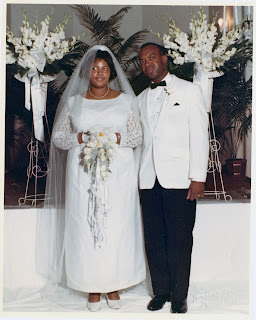 Jackie suggested I write a blog about it, but I couldn’t remember the other people in the photo. The name I found on the back of the photo was Anne Harris. I called my dad to ask him about the picture. My Uncle Paul told my dad that he was the ring bearer at their Uncle Leon and Aunt Anne’s wedding when he was 8. I didn’t recognize Uncle Leon at first, but when my dad told me who he was I immediately remembered him. I met him during one of our several family reunions. I can’t recall if I’ve ever met Anne. This experience has taught me that a lot more than we think can be discovered in the archives, we just have to look for it. You never know what you’ll find.