For today's college freshmen, freshman hazing by the upperclassmen is simply part of an entertaining story line in teenage flicks. Freshman Hell Week doesn't actually happen in real life. There is no week of orders, no courts or punishment. There is only orientation, making it to classes and making new friends. But freshmen from the mid 1920s to the '70s had much more on their minds. 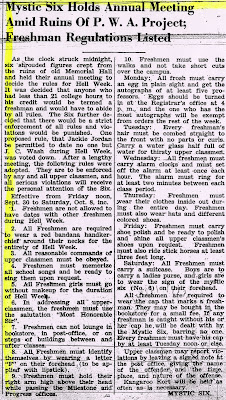 Freshman Hell Week would usually begin on a Monday and wrap up on the Saturday of Homecoming. Prior to the week, various upperclassmen would get together and set-up rules, as well as consequences for the incoming freshmen. Originally, these enforcers were referred to as the Mystic Six. These six veiled figures would disguise themselves in robes and meet to establish the events for the week. 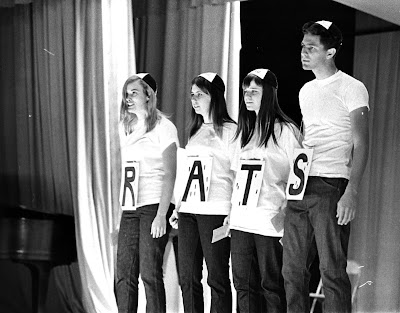 Following their meeting, they would release the weeks events and consequences so that all knew what they were to do and what was expected of them during Hell Week. Some of these events included:
1) wear a red lipstick "F" on your forehand every day
2) carry shoe polish and shine rag at all times
3) wear 8X10 inch sign stating full name and hometown
4) no shaving during Hell Week
5) obey all reasonable orders from upperclassmen
6) wear trousers backwards
7) ride a stick horse, these should be parked outside of buildings.
From what to wear to where and when to eat to what to know, the list goes on and on. 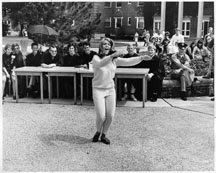 Of course if any breach of the rules occurred, the Mystic Six were to handle the fresh culprit as they deemed fit.

In later years, the Mystic Six turned into the Rat Court for guys and the Cat Court for girls (as seen in the cartoon from the October 20th, 1944 edition of the Eastern Progress). 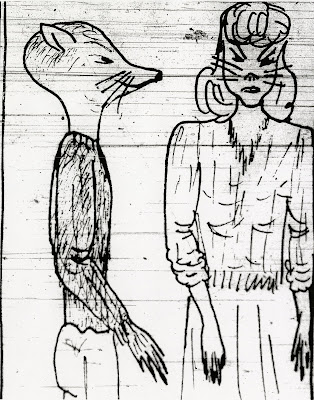 During the week, the Court resided at the front steps of the Keen Johnson Building, which used to be the hot-spot of the Student Union Building which housed the cafeteria, the Grille, and the bookstore. If deemed guilty, a tried freshman would pay the consequences in front of a majority of the student body and even faculty. But such acts were tradition and considered completely normal and acceptable.

However, as years passed and WWII came to an end, war veterans began entering the college scene and did not condone such behavior. These veteran freshmen were, on average, 25-29 years old and had already been through Hell in the military. With their mature outlook and previous experiences, 118 men signed a petition to no longer support nor participate in Hell Week. Petition in hand, a portion of the men marched right up to then president, President William O'Donnell's house and demanded a change. 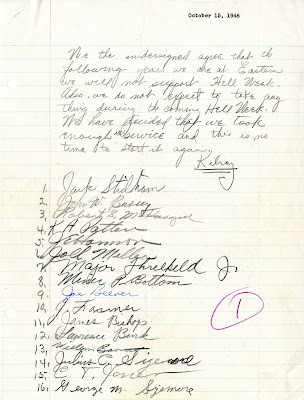 O'Donnell then formed a committee on the matter and from there out, the precedence was set. Participation in Hell Week was not necessarily required.

Though Hell Week continued into the '70s (when the Vietnam War ended and Vets once again made a stand for good), the 'tradition' was no longer set in stone and hazing practices began to diminish. Still, many viewed the 'initiation' as a vital milestone and happily made fun of those who were unwilling to participate (as seen in the Hell Week newspaper article ).

Though there will always be different classes of people, I am relieved that Freshman Hell Week is a long-gone tradition of Eastern's past. Hazing or prejudice does not breed people of character. Hell Week is not a right of passage or a tasteful display of respect. It's quite the opposite in my opinion. Hazing and prejudice breeds hostility, ignorance, and intolerance. There is no respect in demeaning another human being. Respect comes in knowing and standing up for your own rights and the rights of others.
Posted by ashley.salyer at 1:20 PM