Ireland in the Archives 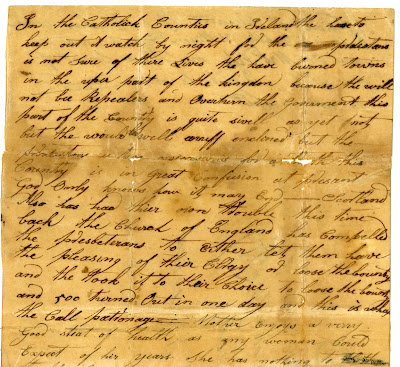 In light of the St. Patrick's Day holiday, we decided to search for Ireland here in the land of the archives. With a little luck, we discovered a piece of Irish history tucked away conveniently in the Green-Fife-White Papers, a collection of letters from 1830 to the mid 1900s. In these letters, a loved one is writing back to the family during the Irish potato famine and reveals some information that we can all read into and learn a bit more from. Before understanding the letters, one has to know the history behind the letters. 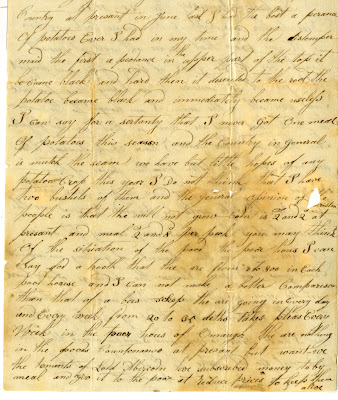 Prior to the Potato Famine, Ireland had had serious political issues largely due to the fact that Ireland was mostly Catholic living under the thumb of a Protestant Britain. As a result, Ireland began to revolt against Britain. Thus, Britain had tried to make Ireland less of a threat by taking away their education, food, and forcing them into poverty. Some Irishmen still tried to revolt (efforts led by liberator Daniel O'Connell, who's also mentioned in the letter below), but Britain continued to place troops in Ireland and force them further into poverty. Thus, potatoes were Ireland's main crop due to their inexpensive, yet nutrient nature. 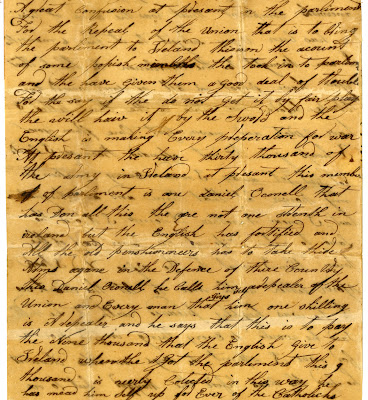 However, Ireland's cash crop went bankrupt in 1845 when American vessels exposed an airborne fungus that swept over the fields of Ireland. Literally tons of potatoes turned to black rot. The loved one talks about the black potatoes in the letter listed below, as well as the Catholics and Britain to another family member who had fled to America.

No one really knows when the famine came to an end for sure. However, the fungus began to dissipate in 1851. Nevertheless, Britain could certainly have intervened more to help the situation. Pieces of history, such as these letters, allow us to glimpse into those years long ago and learn not to make those same mistakes as Britain did. Hopefully we have learned to come together instead of ripping each other and consequently, ourselves, apart. Maybe today, we will help those in need instead of contributing to their struggle.

Posted by ashley.salyer at 9:55 AM