What is the origin of the EKU Colonel? 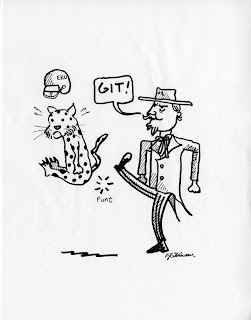 In the 1920's, Eastern students who wished to be known as something other than "The Maroons" voted for the Leopard as the school mascot. A plan to purchase a leopard from the Memphis, Tennessee zoo came to nothing and the students remained Maroons.

In 1963 President Robert Martin established the Colonel as the mascot, who continues in that capacity to the present day. The original Colonel design was by Louisville Courier-Journal editorial cartoonist Hugh Haynie.
(Illustration by author)
Posted by Kyle McQueen at 2:26 PM