Milkin' the Winning Streak in the East 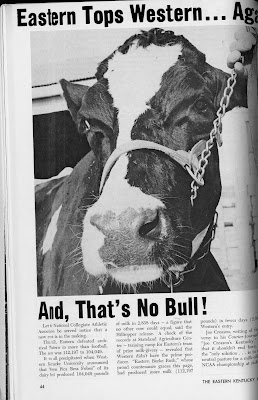 1966 had proven to be a tasty year for Eastern, especially against Western. Eastern had drained the competition and claimed their fifth consecutive KISC Crown in swimming, their ninth OVC Baseball Crown, second place in the OVC in track and EKU's cross country team had captured their second straight OVC title. But best of all, Eastern had creamed Western in football with a score of 24-12.

With this winning-overload, it's not hard to believe that EKU could add yet another beefy win to their plate; however, no one expected the win would be delivered as actual beef.

Earlier in the year, Western had proclaimed that their cow's performance of 104,049 pounds of milk in 2, 838 days could not be equaled. However, Eastern's team at the Stateland Agriculture Center milked a win once again with miss Burke Ruth (who you see gracing this page) with 112, 197 pounds of milk in 2,808 days!!

Oh how sweet victory tastes!!
Posted by ashley.salyer at 1:26 PM