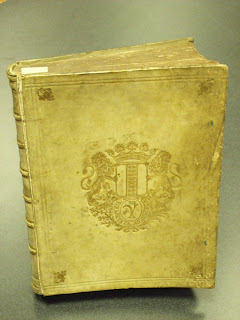 My name is Cherrelle. I’m a senior here at Eastern Kentucky University. I’m an Anthropology major and I work downstairs in the library archives. I’ve been working here since my junior year here at Eastern. I’ve seen so many interesting things for the past year or so. There’s so much I want to write about, but after the Java City water disaster upstairs, that threatened the health of our very old, over-sized, and beautiful books, I was inspired to pick a book from that section to focus on.

I found a book that is titled Euripides Tragoediae Hippolytus. I’m having trouble figuring out what exactly this book is. It’s in really hard binding that’s been warped so much that the book doesn’t close normally anymore. The book is written in both Latin and Greek, so that makes it doubly hard to know what it’s about because I don’t know Latin or Greek. I looked up the book online to see if any site could just tell me what the book is and what it’s about. I got nothing particularly about the book, but a site did tell me that Euripides was a great Greek dramatic poet, who was born in 480 B.C. 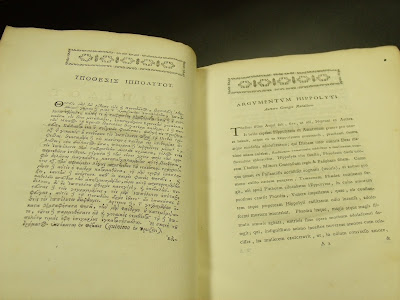 From reading his various biographies online, I understand that the book in my possession is supposed to be the Hippolytus. The Hippolytus is an Ancient Greek tragedy by Euripides, based on the myth of Hippolytus, son of Theseus. The play was first produced for the City Dionysia of Athens in 428 B.C. and won first prize as part of a trilogy. From the description online, I don’t believe that the book here is this play. I am determined to find out what this book actually is. [1]
[1] Written October 8, 2010
Hi, it’s Cherrelle again. After my good, relaxing, and short Fall Break I came back to work intent on finding out what this mysterious book is that I found down here in the University Archives. Once again the title on the book label is Euripidis Tragoediae Hippolytus. I am ready to accept that the book in front of me is the play that I discovered online in my research, but I want more evidence to prove to me that’s what it is. 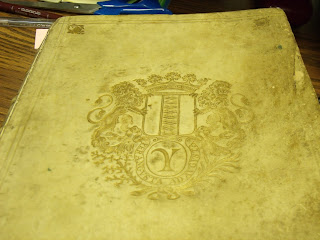 On the cover of the book, there is a seal of some kind with lions, a crown, and a phrase in Latin that says “per angvsta ad avgvsta.” I used Google Translate to figure out what that means and it came up with “through narrow to stately.” I looked up the phrase online and the results came back with several variations of the same thing; “through difficulties to honors,” “through difficulties to greatness,” and “through trial to triumph.” I’m not sure what the coat of arms means and now I’m determined to find that out.
Also on the cover of this book is, I assume, a Greek letter Y. It obviously has some sort of significance, so I looked it up online to find out what that meaning is. According to www.alphabetandletter.com, Y is descended from the Semitic letter vau, which the Greeks borrowed for their vowel upsilon. Y has long been considered a philosophical letter — a symbol of moral decision — because of its forked top. It is also known as the Pythagorean letter because Pythagoras is suspected of inventing it. 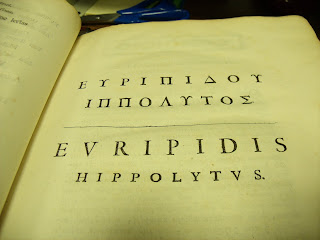 I am convinced the book in my possession is the play that I found online. Through a closer look at the book, flipping through each page, I found the play after a section titled “Argvmentvm Hippolytus.” The play itself is just under 150 pages. The play’s characters are Aphrodite, Hippolytus, Attendants, Nurse, Phaedra, Theseus, Messenger, and Artemis. The play is about scorned woman, who is the one woman you truly don’t want to scorn, Aphrodite. Hippolytus was wanted to pledge his life, in chaste, to Artemis instead of Aphrodite. Aphrodite became livid and made Phaedra, Theseus’ wife and Hippolytus’ step-mother, fall in love with Hippolytus. When Hippolytus didn’t return her love, she wrote a note to Theseus saying that Hippolytus raped her and she hung herself. Theseus believed his wife and banished Hippolytus. Theseus prayed to Poseidon for Hippolytus’ death. As Hippolytus was dying, Artemis appears and tells Theseus the truth. She explains that his son was innocent and that it was Phaedra who lied. Although the goddess admonishes Theseus' decision, she ultimately recognizes that the blame falls on Aphrodite. Hippolytus is carried in half alive, and Artemis promises to take revenge on Aphrodite by punishing anyone that Aphrodite loves. Finally, Hippolytus forgives his father, and then he dies. 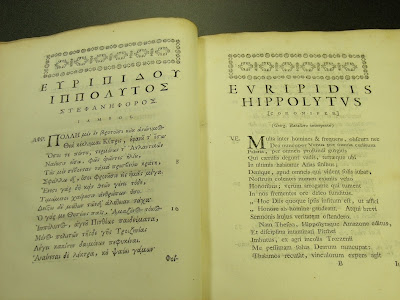 This story is about Aphrodite’s fury and what she can do with it. So if you can read Latin or Greek, you can come down here and ask for this book and read this beautiful Greek tragedy yourself and appreciate it in its entirety.[1]
This is my third day working on the blog for the book Euripidis Tragoediae Hippolytus. I’ve come to the conclusion that the book is the play that my research has led me to. The coat of arms that is on the front of the book looks a lot like the Belgium coat of arms. From researching the publishers’ names, Luzac and le Mair, on the title page, I understand that there is a connection between them and a place known as Leiden. Leiden is in Holland. Also on the title page is “Lugduni Batavorum” which translates to New York, which in Dutch means Leiden. I looked up Lugdunum Batavorum and came up with a town in Holland known now as Brittenburg, which is west of Leiden. So the book was published in Leiden and written in, or translated to, Greek and Latin by Johannes Luzac and Johannes le Mair in 1768. 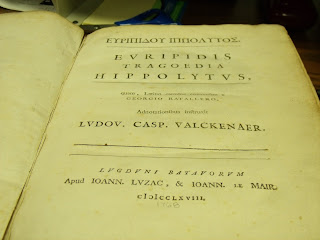 While researching the story behind Brittenburg, I keep running into sites that say that Leiden was connected to Lugdunum. The Brittenburg is a Roman ruin west of Leiden. Brittenburg was part of the Roman border defense which formed the northern frontier of the Roman province Germania Inferior. Lugdunum was a naval base and fortified military granary at the estuary of the river Rhine. I found an interesting story about Brittenburg that I think should be shared. In 40, the emperor Caligula arrived at the beach with many soldiers and then told them to gather sea shells and fill up their helmets and pockets with them. In the winter of 39/40, a military base was constructed at nearby Valkenburg. 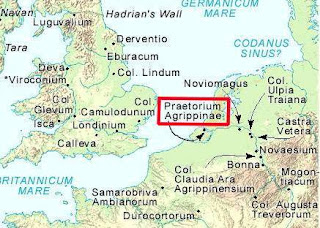 It was called Praetorium Agrippinae; the first component of this name means 'headquarters', the second is a reference to the emperor's mother Agrippina. The presence of the emperor at the mouth of the Rhine is definite, because a barrel has been found that once contained wine from the emperor's personal vineyards. As late as the sixteenth century, fishermen from Katwijk called a group of underwater ruins 'the tower of Kalla'. So now the military base that was Brittenburg, or Lugdunum, is now partly buried by the beach and underwater. It is inaccessible by archaeologists. Now the Roman castle is known as a ghostly apparition that can sometimes be seen at night across the sea. 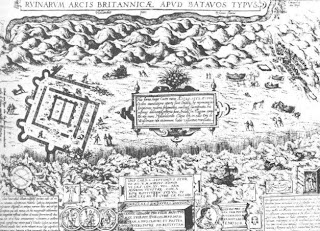 Lugdunum Batavorum, or New York, or Brittenburg, or Leiden, is where the book was translated and published. But the coat of arms on the front of the book might tell me who the book was published for. Online there is a copy of the book available for purchase with a price of £300, whose description says that there is a “gilt device” of Caius College, at Cambridge on the front. Maybe the coat of arms on the front of the copy here will tell me who this copy was intended for. Today, once again, I come up with nothing on the coat of arms.[2]
[1] Written October 13, 2010
[2] Written October 15, 2010
Posted by Cherrelle H. at 10:14 AM